” I could feel the spray from the falls hitting my face as I was slowly pushed across the top of the ledge. I could feel the force of the water rushing over, unnoticeable when safely inside the pool. I could feel the force of the water rushing between my ankles and the hands of the guide. This guide who I had only know for thirty minutes. This guide who had no harness, no ropes. It was in this guide that I put more trust than I had ever put on another single person as he held me over the edge of one of the largest waterfalls in the world. Nothing compares to that moment. “ END_OF_DOCUMENT_TOKEN_TO_BE_REPLACED

The day had finally arrived. We were only one week into an eight week trip but I had been thinking about this day for years. It was the day I would finally ride an ostrich. It’s kind of an odd life aspiration to have, but ever since seeing a Stride Gum commercial featuring men riding … END_OF_DOCUMENT_TOKEN_TO_BE_REPLACED

While travelling along South Africa’s Garden Route we made a stop at Bloukrans River Valley. Although the scenery was certainly beautiful with its steep cliffs of rock and trees jutting down into the river, it wasn’t the reason for our afternoon driving break. It was adrenalin time. Blourkrans Bridge sits 216 metres above the river … END_OF_DOCUMENT_TOKEN_TO_BE_REPLACED

We all stopped in our tracks when a grunt seeped through the forest, letting us all know we didn’t have much farther to go. We hushed our voices and stayed close together with our guide and ranger at the front and another ranger behind us and creeped on, making as little noise as possible as we headed towards the area the noise had come from. END_OF_DOCUMENT_TOKEN_TO_BE_REPLACED

A traveller’s soul is one that dreams big and loves the small things in life. It doesn’t let the darkness of the world hold them back, and that’s a beautiful thing. END_OF_DOCUMENT_TOKEN_TO_BE_REPLACED

Would you look at that!? Water resistant money. How nifty!

While out to lunch with a friend today, I got a phone call from the bank- My New Zealand money was in! I had to order it in because it is not a regular currency traded for at my bank. Three business days after placing my order I obtained $5, $10, and $20 dollar bills from the lovely country I am heading off to in 32 days! I was ecstatic! Although the bills were fairly similar to Canadian ones, there were definite differences that made the so much more fun! Mostly the fact that I could put them under water.

Of course, I had to try it out! After all, if you’re going to make waterproof money, expect people to test it! So easily amused as I dunked the bills under the water time after time, then lifted them out to see if there was any change in them. Nothing. They dried off so quickly that when my brother walked into the kitchen as I was dumping out the water he picked up one of the bills and would never have known it had been dunked, had I not said a word. It was pretty awesome.

Canada is phasing in new Bills made from the same [polymer] material as the New Zealand dollar. It’s more durable and more difficult to counterfeit, so that’s good! I was just excited to get it before Canada, it seems more interesting when most of the people around you haven’t seen anything like it. I enjoyed showing off my new bills today. I especially enjoyed pointing out the size difference between the bills.

The New Zealand dollar bills change in size depending on the amount the bill is. The larger the amount, the bigger the bill. $5’s are the smallest, then $10’s, the the $20’s. I did not receive and $50 or $100 bills, but I am going to assume the pattern continues. I enjoyed lining them up to compare the difference. Just the smallest little things fascinate me.

One more thing that I enjoyed were the two spots on each bill that you could see through. It wasn’t clear to really see anything through them, but it was almost a frosted plastic idea. A foggy window on each bill. One in the shape of an oval, the other in the shape of a fern. Inside the oval is the number of dollars the bill is. 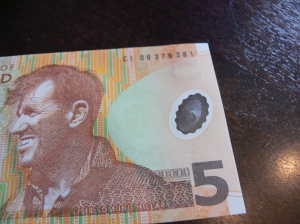 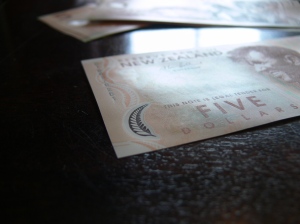 I look at how intrigued I am by this money, and I realize I am going to live in New Zealand for a year and have my mind blown every day. Every day I hope to learn something new, even the smallest things will amaze me. I can’t wait!

One thought on “Today, I Drowned Money.”