” I could feel the spray from the falls hitting my face as I was slowly pushed across the top of the ledge. I could feel the force of the water rushing over, unnoticeable when safely inside the pool. I could feel the force of the water rushing between my ankles and the hands of the guide. This guide who I had only know for thirty minutes. This guide who had no harness, no ropes. It was in this guide that I put more trust than I had ever put on another single person as he held me over the edge of one of the largest waterfalls in the world. Nothing compares to that moment. “ END_OF_DOCUMENT_TOKEN_TO_BE_REPLACED

The day had finally arrived. We were only one week into an eight week trip but I had been thinking about this day for years. It was the day I would finally ride an ostrich. It’s kind of an odd life aspiration to have, but ever since seeing a Stride Gum commercial featuring men riding … END_OF_DOCUMENT_TOKEN_TO_BE_REPLACED

While travelling along South Africa’s Garden Route we made a stop at Bloukrans River Valley. Although the scenery was certainly beautiful with its steep cliffs of rock and trees jutting down into the river, it wasn’t the reason for our afternoon driving break. It was adrenalin time. Blourkrans Bridge sits 216 metres above the river … END_OF_DOCUMENT_TOKEN_TO_BE_REPLACED

We all stopped in our tracks when a grunt seeped through the forest, letting us all know we didn’t have much farther to go. We hushed our voices and stayed close together with our guide and ranger at the front and another ranger behind us and creeped on, making as little noise as possible as we headed towards the area the noise had come from. END_OF_DOCUMENT_TOKEN_TO_BE_REPLACED

A traveller’s soul is one that dreams big and loves the small things in life. It doesn’t let the darkness of the world hold them back, and that’s a beautiful thing. END_OF_DOCUMENT_TOKEN_TO_BE_REPLACED

Well, I have left John’s place and continued my way north. The work I did over the past few days was fairly easy, it was quite a nice way to save money really. Work til noon then have the rest of the day to do what I please. The whole time I was staying with John the only thing I had to pay for was my internet which I had to go into town for. The house I was working at was incredible. It was a 7 million dollar summer home which belongs to John’s daughter and her husband. They created Vodka called “42 Below”, and it was so popular and doing so well Bacardi bought it from them for 130 million dollars.  I wish I had that kind of money!

I left Tutukaka this morning with only a quarter tank of gas. I had tried to get some there, but apparently something went wrong with the petrol delivery and the gas station had none left! I was on edge driving north trying to scout out the next nearest gas station. I barely made it. I arrived in Whananaki after my fuel light had been on for a good few minutes. I rolled up to the gas station only to see a sign saying they had no petrol either. I went inside anyways to talk with the lady working. Luck was on my side after I explained the situation. She had a 10 litre tank stored away in case of an emergency like this. I had to pay a bit extra just as it was the last of the petrol around, but it was better than being stranded and having to hitch to a gas station and back.

I continued driving north, hunting for the next petrol station where I could fill up and buy one of those red containers to fill up as well. I learned my lesson. I just barely made it to the next station. I chatted with the lady who owns the station, it turns out they’re the only ones left on the coast. All the small towns had to close down their stations as bigger ones were open along the highway. The locals all put in money and effort to have the station re-opened. I got off lucky again. I filled my tank and one of those red containers. Bought a bungee cord and strapped it in. Now there is much less pressure about whether or not I’ll make it to my destinations.

The owner of the station was very friendly and before I left she suggested I take a drive along the beaches as they are quite nice. She said to me, “Just follow the road up over the hill then continue the road along the beach. The road goes right along the coast”. What I didn’t realize as I followed her directions was that when she said, “the road goes along the beach”, she actually meant, “The road IS the beach”. I took my little red car driving along the sand using the same principals as if I were driving on snow. I got a little stuck at one point as my tires sunk into the sand, but I put the car in reverse and slowly freed myself. There’s something thrilling about driving on a beach, maybe just because it’s so new to me. I mean, sure, I knew some people drove on sand and beaches and all, but I had never heard of the road being the beach. I’m not sure what happens when the tide is in. 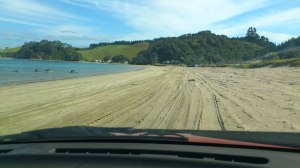 As I continued on my journey I counted four roadkills in less than two minutes. I can’t get over the amount of road kill here. It’s all possums, rabbits, and what surprised me most, birds. At least half the roadkill is birds. And they’re not even flightless birds! I don’t know why they don’t fly away, it just seems silly to me… maybe the birds here are just depressed and suicidal. I guess I’ll never know.

I caution myself when there are birds on the road. I used to just drive along, knowing they would fly out of the way, but because birds here apparently don’t do that, I give them extra time to run. I almost hit two hawks today. Both were feasting on possums along the road. The second hawk I came across tried to take the possum with him but changed his mind. I watched the head animal lift a little then flop back down. I felt like I was living a National Geographic film.  I swerved to avoid the dead animal.

Further down the road I had the choice of continuing straight to drive on the highway or turning right to head down a dirt road. Of course I chose the dirt road. It was quite a long one at that but the views I had and the things I saw were well worth it. As I drove up this dirt road all of a sudden a big sheep poked its head out. I looked around, expecting to see a fence, but apparently this one had gotten out! And so had her baby. I must have startled the ewe as she took off running, a little white fluff popped out of grass and ran along beside her. It was very cute. I pulled over and pulled out my camera. I rolled down the windows and crept the car around the corner to where the two sheep were catching their breath in some grass. I climbed out of my car and knelt to take a couple shots. The white balls of wool started at me, you could tell they were startled. The took off running again. But they were running down the road. I got back in my car and followed. It must have been quite a sight to see a full grown sheep and a tiny lamb running as fast as they could with a little car poking along behind them. Eventually they found a spot where they could climb back through the fence and back into their pasture. Just think, if I hadn’t startled them so much maybe the farmer would still be missing two sheep. Maybe they were his favourite sheep.

I have just now decided that nothing feels better than to pull on a sweater and sweatpants as soon as they come out of the drier. I drove as far as Russell today and decided to call it quits around six. It’s a very quaint town, and everyone has been quite friendly. I had some dinner than wandered through town looking for a place to stay the night. There were a lot of lodges and B&B’s, but I wasn’t willing to pay that kind of money. Even though I haven’t gotten as far as buying a sleeping bag, I decided to spend the night at a campervan park, in my car. I’ll just curl up in my sweats and a towel and hope it doesn’t get too cold tonight. Luckily this park had showers and laundry facilities. The showers run for six minutes at a time, and every six minutes costs fifty cents. The 1.50 I spent was well worth it. Eighteen minutes of steamy, hot water. The laundry was five dollars but the clean clothes were much needed as well.

I am now sitting in the dining area at the Campervan Park, chatting with a group from Australia. There are two families here on vacation. Two couples in their sixties, with their kids. They are quite a funny bunch, very friendly and engaged in conversation with me as soon as I sat down. They all think it’s great that I’m over here doing what I’m doing at the age of 18. One of the girls is from Canada; she’s married to one of the sons. They all think it’s wonderful there’s another Canadian here. They are really quite hilarious though and are calling me “Lorza” just to be funny. I had to write a portion about them as they asked if I had mentioned them in my blog, when I said no they made quite a show, Hanging upside down, making roaring noises and kicking tables and chairs- just to give me something to write about.It’s nice to have so many people to laugh with, even if they are all decades older than me.

11 thoughts on “Six Minute Showers and Camping in Cars”