” I could feel the spray from the falls hitting my face as I was slowly pushed across the top of the ledge. I could feel the force of the water rushing over, unnoticeable when safely inside the pool. I could feel the force of the water rushing between my ankles and the hands of the guide. This guide who I had only know for thirty minutes. This guide who had no harness, no ropes. It was in this guide that I put more trust than I had ever put on another single person as he held me over the edge of one of the largest waterfalls in the world. Nothing compares to that moment. “ END_OF_DOCUMENT_TOKEN_TO_BE_REPLACED

The day had finally arrived. We were only one week into an eight week trip but I had been thinking about this day for years. It was the day I would finally ride an ostrich. It’s kind of an odd life aspiration to have, but ever since seeing a Stride Gum commercial featuring men riding … END_OF_DOCUMENT_TOKEN_TO_BE_REPLACED

While travelling along South Africa’s Garden Route we made a stop at Bloukrans River Valley. Although the scenery was certainly beautiful with its steep cliffs of rock and trees jutting down into the river, it wasn’t the reason for our afternoon driving break. It was adrenalin time. Blourkrans Bridge sits 216 metres above the river … END_OF_DOCUMENT_TOKEN_TO_BE_REPLACED

We all stopped in our tracks when a grunt seeped through the forest, letting us all know we didn’t have much farther to go. We hushed our voices and stayed close together with our guide and ranger at the front and another ranger behind us and creeped on, making as little noise as possible as we headed towards the area the noise had come from. END_OF_DOCUMENT_TOKEN_TO_BE_REPLACED

A traveller’s soul is one that dreams big and loves the small things in life. It doesn’t let the darkness of the world hold them back, and that’s a beautiful thing. END_OF_DOCUMENT_TOKEN_TO_BE_REPLACED

When I first left home for New Zealand in 2011 I never could have guessed the path my life would take. I absolutely loved my time in New Zealand and would go back in a heartbeat. I wouldn’t live there though. Australia on the other hand- that’s a different story.

While I was in NZ people would ask me if I intended to travel to Australia, my answer was very non-committal. I didn’t like the idea of Australia. I’m not a beach person and I was never a big fan of the heat. I can think of a hundred things I would prefer to do over laying on a gritty bed and baking myself like a pizza. I didn’t know much else about Australia apart from the fact that it was a country with a lot of beaches, the Great Barrier Reef, and Uluru, which I had only known as Ayres Rock. My response to peoples queries about my future travels was that I may spend a couple weeks across the ditch to do a bit of diving on the reef, but that was all I had interest in. It’s funny how things change.

As my year in New Zealand came to an end I realized that I was not ready to head back to Canada. My life was just starting. Also, I couldn’t afford the flight back to the northern hemisphere. Australia was the cheapest place to get to with potential of finding work. So off I went, to a place I had little interest in visiting, which is now the only place I want to be.

A few months in Sydney went by where I made some great friends but life was pretty average. Time spent in Cairns and Airlie Beach was beautiful but didn’t quite tickle my fancy. Then I got a phone call. A job interview. A job. Then I caught a bus. I was driven inland. Dropped off. Picked up by my new boss. Driven another couple hours inland. It was dark out and I had no idea where I was or what my surroundings were.

The sun came up the next day and my breath was taken away. I had gone from a city on Australia’s east coast to a cattle property in Australia’s outback. The dirt was red, the trees sparse, the kangaroos plentiful. There wasn’t another house to be seen in any direction. The air was sweet and the water sweeter. There were frogs living in my toilet and a snake under my house. Cows grazed below my window and 12 dogs ran around and played. This wasn’t an Australia I had seen on a post card. It wasn’t the Australia I had heard of from other travelers, or seen in movies, or read about it books. This was the outback and it was even better than I had imagined.

Day after day I was amazed by the life I was living. Rounding up cattle while sat atop a horse, collecting eggs each day from the chook-pen near the house, hopping on the four-wheeler and taking the dogs for a run, taking my camera out and driving around the 70 000 acres that I had to myself. In time I realized that I was where I wanted to be.

My heart broke when I had to leave to return to Canada. I had never expected to feel so at home in a place so far away, in a place I hadn’t had much interest in to begin with. It just goes to show that it’s worth giving everything a shot because life can surprise you in ways you would never have guessed. Someday I’ll return to Australia, I’ll go back to the place that stole my heart and my breath away each and every day, but for now I’ll just have to make the best of what I’ve got and maybe, just maybe, I will fall in love with the country beneath my feet. 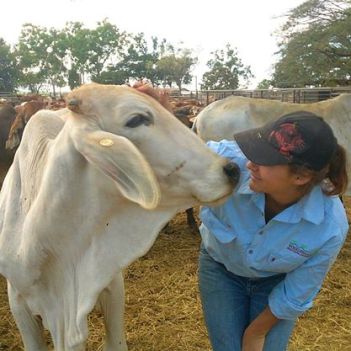 5 thoughts on “How Australia Broke My Heart”