” I could feel the spray from the falls hitting my face as I was slowly pushed across the top of the ledge. I could feel the force of the water rushing over, unnoticeable when safely inside the pool. I could feel the force of the water rushing between my ankles and the hands of the guide. This guide who I had only know for thirty minutes. This guide who had no harness, no ropes. It was in this guide that I put more trust than I had ever put on another single person as he held me over the edge of one of the largest waterfalls in the world. Nothing compares to that moment. “ END_OF_DOCUMENT_TOKEN_TO_BE_REPLACED

The day had finally arrived. We were only one week into an eight week trip but I had been thinking about this day for years. It was the day I would finally ride an ostrich. It’s kind of an odd life aspiration to have, but ever since seeing a Stride Gum commercial featuring men riding … END_OF_DOCUMENT_TOKEN_TO_BE_REPLACED

While travelling along South Africa’s Garden Route we made a stop at Bloukrans River Valley. Although the scenery was certainly beautiful with its steep cliffs of rock and trees jutting down into the river, it wasn’t the reason for our afternoon driving break. It was adrenalin time. Blourkrans Bridge sits 216 metres above the river … END_OF_DOCUMENT_TOKEN_TO_BE_REPLACED

We all stopped in our tracks when a grunt seeped through the forest, letting us all know we didn’t have much farther to go. We hushed our voices and stayed close together with our guide and ranger at the front and another ranger behind us and creeped on, making as little noise as possible as we headed towards the area the noise had come from. END_OF_DOCUMENT_TOKEN_TO_BE_REPLACED

A traveller’s soul is one that dreams big and loves the small things in life. It doesn’t let the darkness of the world hold them back, and that’s a beautiful thing. END_OF_DOCUMENT_TOKEN_TO_BE_REPLACED

While travelling along South Africa’s Garden Route we made a stop at Bloukrans River Valley. Although the scenery was certainly beautiful with its steep cliffs of rock and trees jutting down into the river, it wasn’t the reason for our afternoon driving break. It was adrenalin time.

Blourkrans Bridge sits 216 metres above the river running below. It’s the third highest bungy, and the highest bridge bungy in the world, so naturally, I felt the need to do it. I had bungy jumped three times before. Twice in Canada, and once and the famous Nevis Bungy in New Zealand. I had screamed every time. This time, as confident as I thought I was, I screamed again.

Myself and two others from my Absolute Africa group decided to put our faith in a very large elastic band. We signed away our lives, stood on a scale to judge which cord would be used as our lifeline, then headed over to be suited up in a harness.

We had to put our harnesses on a half hour early, which did make me a little uneasy but also kick started my adrenalin. You see, as we sat and waited, and listened to the screams of the group of jumpers who preceded us I realized that I really needed to pee. So off I strolled to the washroom.

As I stood in my stall I hesitated. The harness was fairly simple, nothing I couldn’t work out, but there was the nervousness that I would put it on not quite right again. Cautiously, I stepped out of my harness, making sure not to loosen the straps and memorizing how I took it off so I could be sure to put it back on correctly. Then I did my business and confidently stepped back into my harness. I was surprised our straps weren’t double checked before we were led out across the bridge.

The walk to the jump spot was a great buildup. We were led to a path under the bridge that had netting on the sides and a metal mesh flooring under our feet. The farther we walked out, the farther down the ground was. I thought one of my travel mates was going to turn back before we even made it across. This bungy jump certainly isn’t for the feint of heart. 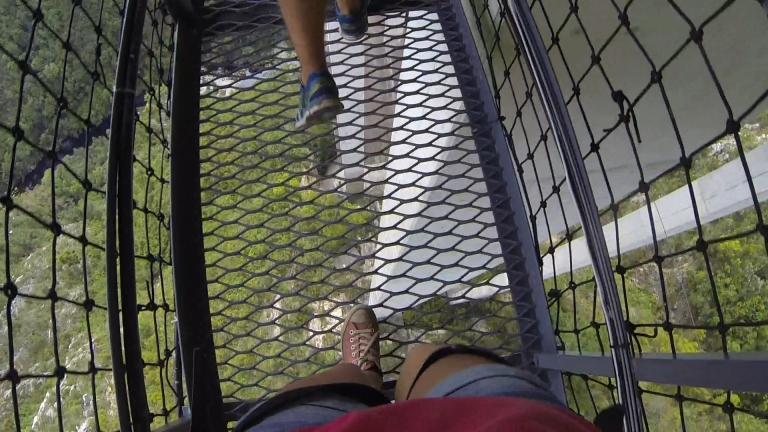 We sat and waited on benches under the bridge, watching jumper after jumper shuffle their way to the edge, holding onto the staff for dear life as the listened to their countdown. I reassured my friend when it was his turn. He was terrified of heights and was second guessing his decision but he held it together and kept his cool as his feet were tied together and he fell, somewhat-gracefully from the ledge.

I was the last from my group to jump. I chatted away with the staff as I sat and waited, the familiar feeling of the pad being wrapped around each leg, then the cord finally being tied between them. My friend arrived back on the bridge just before I jumped. His hands were shaking, but he was smiling. No regrets there. 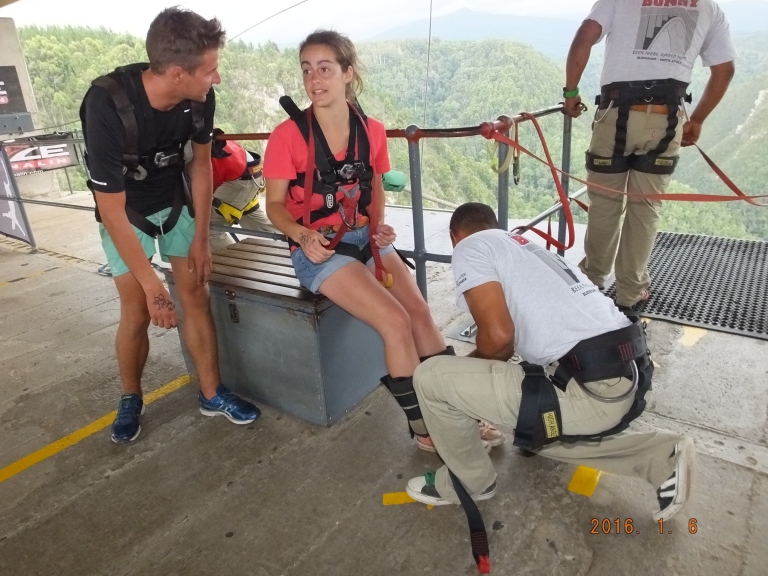 As they called up the next jumper I double checked that my gopro was switched on and let the two staff guide me, one on each arm, to where I would make my fall. If my hands had been tied as well I would have thought I was living in a pirate movie and being made to walk the plank. I took a breath and imagined in my head how gracefully I would jump, like a swan, being the experienced jumper I am.

“Two…” Why do I always think this is a good idea?

“One!” And the screaming started.

Arms spread wide open, I took the fall with what I thought was style as I plummeted to the ground. Then, smoothly and gently, I was bouncing back up towards the bridge. Then down again. Spinning. I always spin. I’m not sure why I tend to twirl around so much as my cord settles, it’s common to spin a little, but I go around like a fair ride. Then I waited. 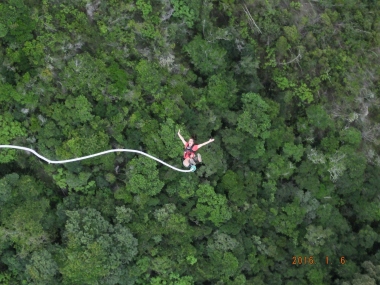 I felt the blood starting to go to my head as I waited for my rescuer to be lowered down to take me back up to the bridge. I attempted to lean upwards to lessen the pressure in my head and immediately regretted not doing sit-ups more often. I gave up on that idea pretty quickly and just enjoyed the view of the upside-down world.

Return to land was welcome, legs feeling like jello and adrenalin still pumping. We headed up to the Cliffhanger restaurant where the rest of our group was watching and waiting.

“Your video got the best reaction,” one of the girls told me, “Everyone in here gasped as they watched you fall.”

I understood why as I rewatched my video. Instead of the perfectly graceful swan dive I imagined myself doing, I was instead doing a loose canonball. Yes my arms were out, but they looked more as if I was trying to flap than swoop. My knees were pulled to my chest. At one point I think I even did a toe grab- Maybe I should learn to skateboard.

Although I didn’t feel this jump was quite as great of an experience as New Zealand’s Nevis Bungy,  I certainly have no regrets for jumping, and I’m sure I will put my faith into a large rubber band again somewhere, someday soon.

Check out the video below!

There was an error retrieving images from Instagram. An attempt will be remade in a few minutes.