” I could feel the spray from the falls hitting my face as I was slowly pushed across the top of the ledge. I could feel the force of the water rushing over, unnoticeable when safely inside the pool. I could feel the force of the water rushing between my ankles and the hands of the guide. This guide who I had only know for thirty minutes. This guide who had no harness, no ropes. It was in this guide that I put more trust than I had ever put on another single person as he held me over the edge of one of the largest waterfalls in the world. Nothing compares to that moment. “ END_OF_DOCUMENT_TOKEN_TO_BE_REPLACED

The day had finally arrived. We were only one week into an eight week trip but I had been thinking about this day for years. It was the day I would finally ride an ostrich. It’s kind of an odd life aspiration to have, but ever since seeing a Stride Gum commercial featuring men riding … END_OF_DOCUMENT_TOKEN_TO_BE_REPLACED

While travelling along South Africa’s Garden Route we made a stop at Bloukrans River Valley. Although the scenery was certainly beautiful with its steep cliffs of rock and trees jutting down into the river, it wasn’t the reason for our afternoon driving break. It was adrenalin time. Blourkrans Bridge sits 216 metres above the river … END_OF_DOCUMENT_TOKEN_TO_BE_REPLACED

We all stopped in our tracks when a grunt seeped through the forest, letting us all know we didn’t have much farther to go. We hushed our voices and stayed close together with our guide and ranger at the front and another ranger behind us and creeped on, making as little noise as possible as we headed towards the area the noise had come from. END_OF_DOCUMENT_TOKEN_TO_BE_REPLACED

A traveller’s soul is one that dreams big and loves the small things in life. It doesn’t let the darkness of the world hold them back, and that’s a beautiful thing. END_OF_DOCUMENT_TOKEN_TO_BE_REPLACED

Kick things off in Cape Town with an adrenaline pumping cage dive with the most feared creatures of the sea, the great white shark. Book a trip with one of the many reputable companies then head on out to Gansbaai for your opportunity to suit up and climb into a cage and watch these terrifying creatures circle you. If you choose not to get into the water there is always a great view from the boat as well where the sharks can sometimes be seen breaching and swimming uncomfortably close to the boat.

Get friendly with the jackass penguins that reside at boulders beach. Take photos of the colony from the boardwalk or pay a small fee to head down onto the beach, roll your towel out and go for a swim in the Indian Ocean with these little tuxedoed fellows.

Check out the southernmost tip of Africa at Cape Agulhas. It’s also the dividing point between the Atlantic and Indian Oceans. Spend some time on the beach there or climb to the top of the second-oldest operating lighthouse in South Africa.

Rent a car or catch a bus along the garden route to Oudtshoorn where you can go on a tour of an ostrich farm, get a photo sitting on top of the worlds largest bird, then go for the ride of your life. After a great ride and a few laughs the ostrich jockeys- yes, that’s a thing- suit up and prepare to race. Pick your favourite ostrich and cheer him. 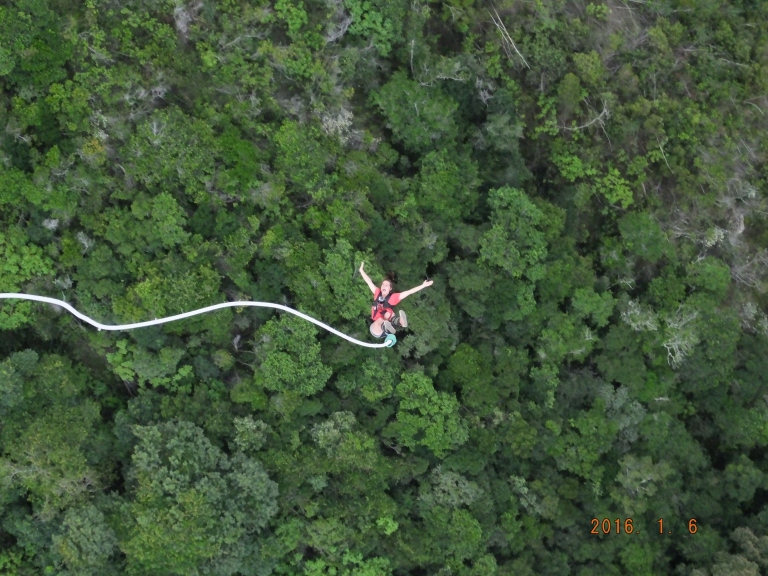 If Cage diving and ostrich riding wasn’t enough adrenalin for you then get your feet tied together and throw yourself off this perfectly good bridge. After completing your jump you’re given a certificate to prove you jumped off the world highest bungy bridge at 216 metres. There is also the option to purchase photos and the video of your jump if you want to prove to friends and family how crazy you really are.

6. Ride the Waves at Jeffrey’s Bay

Ranked as one of the worlds best 5 surf locations this is the perfect place to try your hand at this water sport. Surf lessons are available for the inexperienced at reasonable prices, for those who know what they’re doing it’s easy to rent a surfboard and catch some wicked waves. Just pay attention to warnings if you’re going out deep as the odd shark may come join you or a ride.

Boasting the big seven, a stop at Addo is worth your while. Take your car on a self drive safari through the park. Keep your eyes peeled for a rare lion sighting, or try to spot one of the forty-eight endangered black rhinos that live in the park. Addo was originally set up as a sanctuary to house the last 11 elephants in the area and is now home to over six hundred of these giants.

South Africa’s first national park is also one of the largest game reserves in Africa, covering close to 20,000 square kilometres. The park is home to more large animal species than any other African game reserve making it a fantastic stop for some sightings you can really brag about to the folks at home.

The Apartheid Museum which opened in 2001 is a real eye-opener. From the moment you purchase your entry ticket the journey begins. Each ticket is randomly chosen as a “white” or “non-white” pass. There are two separate entrances to the museum, you follow the path according to whichever you have been labeled, joining up with your fellow travelers a little further in. The museum takes you through all the events of the Apartheid which lasted in South Africa from 1948 until 1994. Reading the news articles, the information boards, and watching the films throughout will make your heart ache seeing the struggles that went on until recent. Take a few hours out of the end of your trip to appreciate the struggles that that have been battled in this beautiful nation.